The Wilderness Of Eden 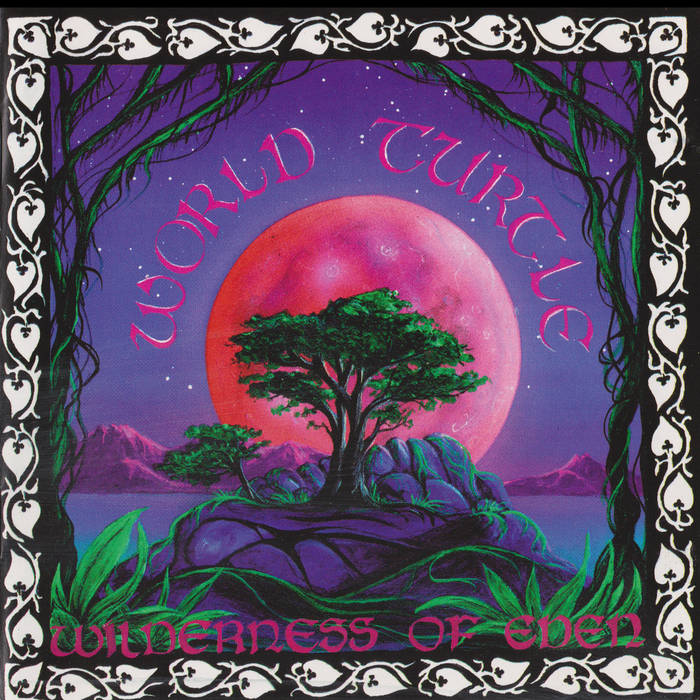 Across The Universal Soundscape

Hello & welcome to the new World Turtle CD. In many ways this feels like our first CD. Previous releases were either compilations or remixes of Haze material, even the 1994 World Turtle Haze CD was promoted by Cyclops as being by our previous band Haze, and indeed, much of the material on it was written while we were in Haze, and almost all the songs had been previously recorded, albeit as cassette only demo releases. The Wilderness Of Eden comprises the very latest World Turtle songs, recorded here for the first time (OK, so Rip Van Winkle was on our Groove Taboo demo and the Peterhouse Trust compilation CD, but this is a greatly revamped version). Many of the songs were written in 1995/6 and have therefore been gigged and honed into shape quite extensively. Now that the opportunity has finally arisen to put the songs out on CD, we have decided to try and break away slightly from the live versions by involving other musicians in the project. Over the two decades that we have been writing and performing music, we have had the privilege of meeting many talented musicians, and we felt it would only improve the final product if we used their talents to bring a new slant to the songs. Sam Carr played drums in an early World Turtle line-up before nearly finding fame and fortune with Apes, Pigs & Spacemen. Derek Nash was a University colleague of Chris's who has often played live with us, as well as appearing on Haze's Cellar Tapes and Cellar Replay cassettes. He fronts the jazz group Sax Appeal and is a successful session player (he did all his sax & flute parts in one day, while in Sheffield for a blues/soul gig at Hallam University). We have known Gordon Walker for some time, (in fact Chris once played drums in a punk band with his sister Ruth), and met him again recently at a Classic Rock Society gig in Rotherham & asked him to play violin & mandolin for us. Linda Wilson has also been known to us for some time, perhaps because she is our cousin! As she plays viola in the Hull Youth Symphony Orchestra, she was the logical choice to complete a mini string section for Human & Heroes. Warren Jacques turned up on our doorstep in 1984 and announced that his vocation in life was to be a sound engineer. He has worked with us ever since, is now one half of Von Daniken, and is featured on acoustic guitar & sonic screwdriver! Nick Robinson was in They Must Be Russians and Dig vs Drill, and has worked with The Comsat Angels and with Chris on a number of projects. He now performs ambient guitar music as Winston N'Gobola frequently supporting us live. Another guest at recent live shows was Martin 'Fredrik Satsuma' Sommers, who has roadied with Chris in the past and recently made his own solo cassette album in Cellar Studios. We have also played many gigs with lzon Paradise and so asked singer Mick & drummer Mole to help out with the choir on One Day. The others singers are our parents. wives/fiancees, cousins, second cousins & in-laws. In many ways CDs are great, they sound better than your scratchy old records & hissy old tapes, and as an artist you know that the master tape you leave the studio with is not gong to be degraded appreciably in quality before it reaches the listener, but they have one big problem - they're too long! Gone are the days of the 45 minute album being good value for money, you've got 74 minutes so use it! This is all very well, but how many bands do you want to listen to for an hour and a quarter at one sitting? I can't think of many. Sure, we could have made a shorter album, but then would we have fallen foul of accusations of poor value for money? And which songs would we have missed off? The best way out of this dilemma I can see is to regard this as a double album and pause it after say Stalemate or Vertigo & go and make a cup of tea or take the dog a walk, before returning for the second half with refreshed ears. I think this beats paying £11.99 (or more) for 40 minutes of music, then waiting 2 years for us to release the rest of the songs! In the event. we ended up leaving off one song 'More, this and alternative versions of some of the other tracks can be found on the 'outtakes' cassette, available free with this CD, if you get an SAE to us soon enough! This is not quite a concept album (this is 1997!) but is a collection of songs with a loose connecting theme best summed up in verse two of One Day “I've tried hard but I can't understand the reasons. Please try to make it clear Why we carry on a search for other Edens, when everything we need is here.”
Chris & Paul, June 1997